In just 30 days, one of the world’s biggest sporting extravaganzas – the IAAF World Championships – will come calling on the Qatari capital.

In the heart of Doha, wherever you look, there are tell-tale signs of a big sporting extravaganza coming to the city soon.

On both sides of the Doha Corniche Street, you will see several temporary floodlight towers being erected for the 2019 IAAF World Championships’ first-ever midnight marathon.

Huge banners featuring images of athletes adorn some of Doha’s most prominent high-rises. The ticket kiosk at the Doha City Centre is experiencing busy times, with many fans arriving to grab seats for the different competition sessions.

The Qatari capital city is slowly getting into the mood for the Worlds, which promises to be a landmark event both on and off the field.

It is the Middle East’s first-ever outdoor Athletics Worlds. Earlier, in 2010, Doha had hosted the IAAF’s biennial Indoor World Championships under the Aspire Academy Dome.

As the excitement mounts with 30 days to go, the unveiling of medals to be awarded to the winners has further heightened the anticipation.

Paying homage to the Qatari capital, the winners’ medals were designed by a local all-female branding team, showcasing the Doha skyline and illustrations of the Khalifa International Stadium. Different elements of athletics disciplines are also weaved into the design. Traditional Arabic Sadu patterns have been incorporated into the design with a modern sporting twist. 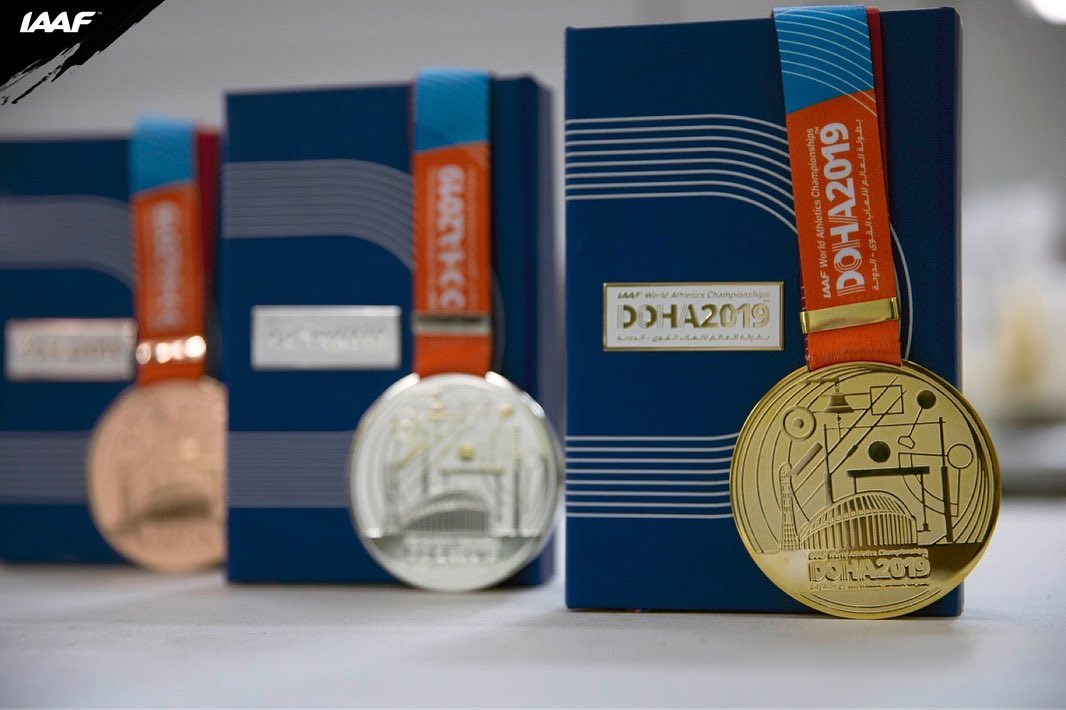 While the refurbished Khalifa Stadium is set to keep athletes and spectators amazed with cutting-edge technology, a clutch of athletes are readying themselves to corner the spotlight. Among them, sprinter Noah Lyles promises to raise the heat significantly on the newly-laid bright red track.

The American recently blazed to the 200M gold (19.65sec) at the Paris Diamond League meet to best Jamaican legend Usain Bolt’s competition record. The 22-year-old, planning for a sprint double at the 2020 Tokyo Olympics, will take part only in the longer event in Doha. He made his intentions clear after the Paris win.

“Looking to Doha, it’s not about going after Bolt’s record or anything like that, but when we get there, we’re willing to go after any record,” he had said.

Earlier, Lyles had won the 200M race in Lausanne with a world-leading time of 19.50sec, making people wonder how fast the runner can go.

In Doha, he is likely to be challenged by his compatriot Michael Norman and Turkey’s reigning world and European champion Ramil Guliyev.

Star jumper Mutaz, who stayed away from competitions for close to a year due to injury, is yet to clear the World Championship qualification height of 2.30M this season. However, he made the cut for the worlds by virtue of being the reigning world champion. He is sure to have an extra spring in his step as he laces up for battle in front of his home fans.

The World Championships run from September 27 to October 6.