At 55, Mike Powell still looks sprightly. Age has brought some creases on the former long jump champion’s cheeks but he seems fit enough for a leap or two even now.

Powell, though, knows the time for that is past. Twenty-eight years ago, time was very much on his side as he soared through the Tokyo air to set a world record of 8.95M.

That record, set at the third World Championships, has stood the test of time. Powell is understandably proud of that moment, when he erased Bob Beamon’s imposing 8.90M mark set at the 1968 Mexico Olympic Games. That he beat the legendary Carl Lewis for the gold made the moment sweeter for the American.

Close to three decades later, Powell’s mark is coming under pressure. Long jump, struggling without a big performer, seems to have found a new star in Cuba’s Juan Miguel Echevarria, who has produced some big jumps of late. The spotlight, certainly, is on Echhevarria as he guns for the gold in Saturday’s final of the World Championships in Doha.

Powell, in the Qatari capital as a brand ambassador of the event, spoke to Inside Qatar about Echevarria, the state of his sport and the reasons behind his record still standing. Excerpts:

How do you assess the long jump field here in Doha?

I think (Juan Miguel) Echevarria is definitely the favourite. He just won his last competition in Zurich, taking one jump and saying, ‘okay, I’m going to Doha.’ So I’m picking him. And then we have Luvo Manyonga from South Africa, he’s also a good prospect. But when it comes to the World Championships, you never know. Someone could come from nowhere and start to show that they’re the ones to watch out for next year. That’s what I’m looking for, because you know those two (Echevarria and Manyonga) are going to do well.

As for the Americans, Jeff Henderson might be the Olympic champion, but you never know what he can do. Sometimes he jumps well, sometimes not so good. Right now, Echevarria is ahead, the rest of it, who’s going to be the other medallists, that’s the question, that’s the fun. I wish I was out there!

What are the qualities that separate Echevarria from the others?

The thing for long jump is, speed multiplied by height equals distance. So the taller you’re and the faster you’re, the better. So Echevarria is a bit taller than me, not quite fast but he’s learning. And when he jumps, I can see, he’s trying to jump up there.

You never bothered about fouls when you jumped. Is it the same with him?

When you get better technically, you foul less. So when I was younger, I was just all over the place. As you get more experienced, you get better. I had a big advantage — I was competing against Carl Lewis. I was watching the best, I was trying to do what he did, all the time. They don’t have anybody to watch. They’ve the videos but I competed against him.

How was it competing against Carl Lewis?

It took a world record just to beat him. It took that unbreakable world record just to beat him. And after that, everyone was expecting him to bounce back and beat me. They were surprised he didn’t break the record again. That was how good that guy was. It was an intense competition, it was like someone coming up and beating Usain Bolt at his peak – like Bolt running 9.58 and the other guy running 9.54.

Why do you think your record has stood the test of time?

Lot of different things. Technique is some of them, I think also expectation. When I was jumping, I expected to get the record. Carl was going for the record. Carl jumped 8.60-8.70 all the time. You came to a competition knowing that you might jump 8.70 and still be second. These days, if they jump 8.70, they know they’re going to win. So it was different, we were at a higher level.
Also a big reason is that the focus isn’t on long jump anymore. Long jump used to be one of the big events. Now it struggles for attention it would’ve got, for instance, if Bolt was jumping – he should have, he didn’t. Jesse Owens, Carl Lewis – both ran and jumped. Bolt did the running, he didn’t jump. He could have broken my record. As I said, speed multiplied by height equals distance. He’s the fastest man in the world, he’s a tall man too and he can jump, his only problem would’ve been landing – it might’ve ended up being his last jump!

Do you think Echevarria could break your record?

I think the chances of him doing it are better than him not doing it. So if he doesn’t do it, I would be surprised. He should. He is only 21 and he is already jumping 8.93, wind-aided, 8.80 wind-aided, and 8.65 in cold weather. He has it, but there has to be competition. There’s nobody to push him. Me and Carl pushed each other. If there’s someone to push him, he’ll do it for sure. He wants that record. Cuba want that record. Ivan Pedroso (former world champion from Cuba) wants that record for Cuba!

What are your expectations from Doha?

Oh! There’re so many events to choose from! I’m an athletics geek, I just happen to be a world record holder. I’m so excited! I want to watch the 100M, the 200M, the 400M hurdles in both sections…. Gosh! So many different things.. I’m so excited, I love the World Championships, for me it is fun. 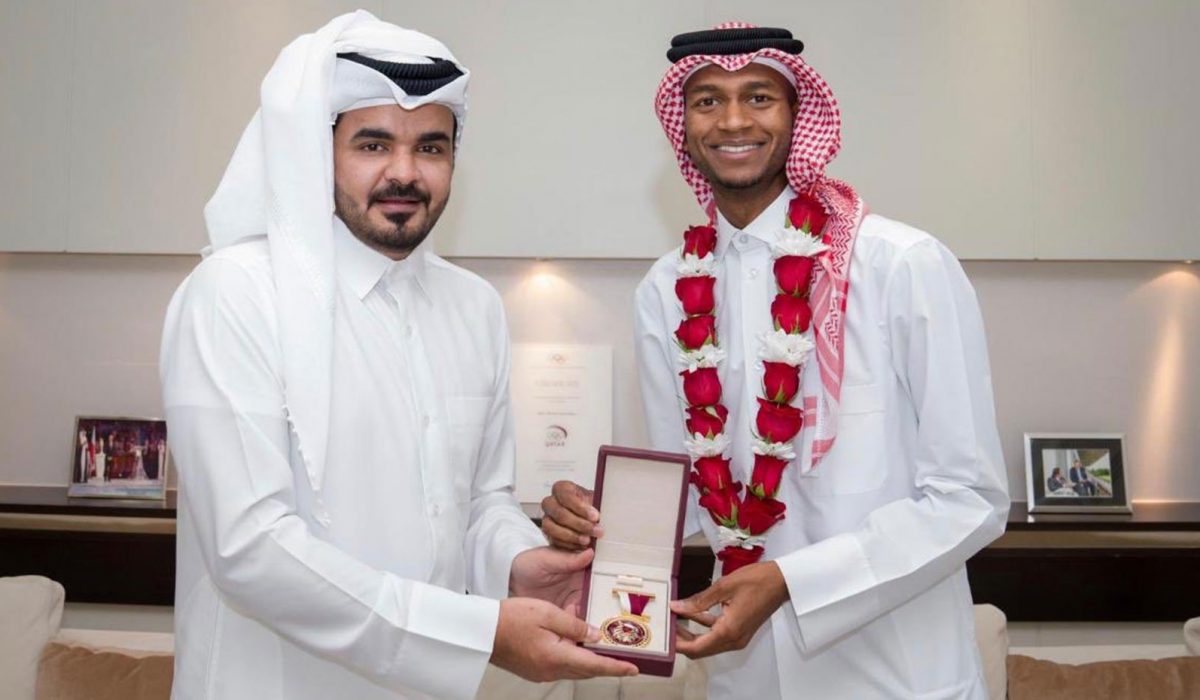